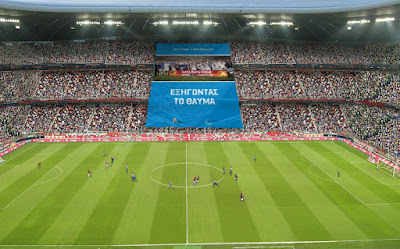 About the book: “Explaining the Miracle” is the story of creating a national team out of almost nothing, and transforming a group of ordinary- till then - players to a real team. The story begins from Old Trafford, October 2001, the England - Greece 2-2 match, which was the first sign from Otto Rehhagel about the team he was trying to create and ends on July 2004 at “Estadio da Luz”, where Greece made one of the biggest surprises in the history of the sport. It follows the team in every decisive step from summer 2001 until the creation of the compact group which appeared in Portugal in 2004.
Rehhagel, his assistant, the team manager of that team, the president of the Greek Football Federation of that era, and 11 of the players (Zagorakis, Dabizas, Nikolaidis, Karagounis, Charisteas, Katsouranis, Kapsis, Dellas, Venetidis, Nikopolidis, Fyssas) are the main narrators of the story. Through their detailed answers they give to the reader the chance to realise and understand that it was most about mentality, professionalism and team spirit.
A Greek football coach, author of 12 football - analysis books, analyses the England - Greece match, the Spain - Greece 0-1 match on June 2003 and all 6 Euro 2004 tournament matches of Greece. With those tactical analyzes the reader learns everything about Rehhagel’s game plans, his tactics and tricks on his way to the Euro 2004 trophy. The book also contains the official technical reports of UEFA’s Technical Committee, with UEFA’s permission.
The author's analysis is scientifically documented by studies and research by scientists from statistics, psychiatry, neurology, and man management.
Rio Ferdinand, David James, Fernando Morientes, Dmitri Bulykin and Jorge Andrade give opponent’s view to the reader.
The author, who was a reporter and followed the team from 1999 till 2004 gives insights with the authority of an eyewitness in a comprehensive survey which is enriched by Greek/German/English/Portuguese newspaper reports from those times, and quotes from Mourinho, Wenger, Lineker, Alan Hansen, Bobby Robson.
“Explaining the Miracle” is all about the science behind a footballing fairy tail. It’s a book with the story about a manager who took an amateur team which had never won a single game in a tournament and transformed it with simple but wise touches to the Champions of Europe.

About Vasilis Sambrakos:A Greek journalist in Sports, 45 years old, working as a content director in the biggest Greek sports website (gazzetta.gr), as a pundit at CosmoteTV, the UEFA Champions League & Europa League broadcaster in Greece. Also holds a daily radio show at the biggest sports radio, called SportFM 94.6. He was a director of printed Sports daily newspapers (from 2005 to 2011) before becoming digital only.
“Explaining the Miracle” is his 2nd book. The first one, a football novel, fiction (“Tear up the manual”) was published only in Greece in 2009 and became a best seller.
Αναρτήθηκε από Βα.Σα. στις 4:10:00 μ.μ.